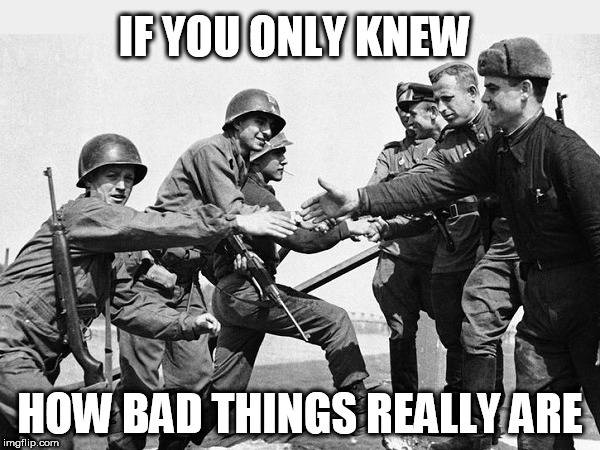 My dearest liberal fan on CL,

Your recent communication touched upon a dizzying range of topics, and truthfully, I'm not even sure where to begin in my attempt to respond to it, there's just so much to work with. Hillary, Comet Ping Pong, fem-bots, circumcision (a deeply personal issue for me after that traumatic zipper accident when I was 6 years old)...it's just a plethora of comic fodder for the old Captain. I must admit, your fevered imagination, combined with your snide, articulate wit, always makes for an enjoyable read, and I truly envy your outstanding writing skills (I still sometimes wonder if you write for the Onion, or if perhaps you're a seasoned reporter for the Weekly World News). As another benefit, reading and replying to your posts provides me an opportunity to take a much-needed break from the Innerweb midget/BBW granny porn, as the carpal-tunnel in right wrist is growing increasingly worse. Anyway, just as your pink-pussy hat is off to me, my blood-splattered MAGA hat (I wore it at Charlottesville) is off to you in mutual respect and admiration, despite your despicable political agenda. Think of this as being similar to that historic moment when the Russians met the Americans at the Elbe in 1945 and shook hands, shortly before beginning a half-century-long Cold War that caused millions of deaths in proxy wars, often bordered on the brink of nuclear-annihilation, and threatened the very existence of mankind. I doubt if our relationship will ever come to that, but one never knows.

I'd like to focus on just one of your topics for the time being, that being the infamous Comet Ping Pong pizza parlor in DC. You may have already guessed that I, as a well-versed, intellectually honest, articulate conspiracy-driven right-wing white supremacist nutcase, have devoted a considerable amount of time researching the troubling Pizzagate conspiracy theory on 4chan, Reddit, and various right-wing YouTube channels, including, but certainly not limited to, Alex Jones' Infowars and the lesser-known Roseanne Barr Pizzagate Investigation Channel. Not surprisingly, the overwhelming conclusion of all these indisputably credible and unbiased news sources was that Comet Ping Pong served as a front for an international child-trafficking ring headed by Hillary Clinton and Skippy Podesta. Daily Stormer also claims that Jewish fuckery was somehow involved, and even though they didn't provide a great deal of evidence, it would only make sense. After all of this intensive, in-depth Innerweb research, there is little doubt in my mind that Comet Ping Pong was indeed a satanic house of worship where the debauched Washington DC elite participated in unspeakable acts of sodomy with abducted children, and then after satisfying their abhorrent desires, offered the tiny, helpless victims to Moloch, the ancient demon of child sacrifice.

But all kidding aside, sorta...

Did you know that Comet's owner, James Alefantis, was rated as the 49th Most Powerful Person In Washington DC by GQ? Not bad for a humble pizza joint owner, eh? Did you also know that "Jimmy Comet" was once packing David Brock's fudge? That's right, he was humping the top-dog of Hillary Clinton's propaganda super-pac "Correct the Record", the same guy who later founded the Clinton-friendly Media Matters and is often-times refered to as Hillary's "hatchet man". How about the numerous references to Comet Ping Pong and cheese pizza in Skippy Podesta's leaked e-mails? Were you aware that "cheese pizza" (CP) is pedo-code for child porn? Or what about the odd fact that the "crazed gunman" who stormed the joint was an aspiring actor who had an IMDB profile? Did ya know the one shot he fired went through a wall and shattered the hard-drive of the Comet Ping Pong computer? That sorta worked out well for old Jimmy, huh? He'd never have to hand that hard-drive over to the cops if they ever asked for it, and at the same time he'd have verifiable proof as to how it was destroyed. This "shooter" bullshit was a blatant false flag that was intended to prove to the world that Pizzagate believers were dangerous right-wing whackos and that the whole theory was absurd, while at the same time serving as another example as to why big scary guns need to be taken away from American citizens...it was a Deep State two-for-one.

In my next installment, I'll discuss the fascinating topic of fem-bots, and why I believe they may one day replace actual human females entirely and make the world a better place (if nothing else, you can slap 'em around and they won't call the cops like that stupid cunt I met on Plenty Of Fish last week). Strictly for research purposes pertaining to this subject, I have purchased a Bitch-Droid® "Roxxxy 2600" on eBay (got a good deal on it, but shipping it from Buffalo, NY to Caleb's Island was rather costly), it's pre-owned but the seller claims that it's in excellent condition with a recently-replaced rectum bearing (always the first thing to go on the older Bitch-Droid® models according to a fem-bot mechanic I know). I expect delivery by tomorrow and may be absent from this board for a few days while field-testing this sexy cyborg and training it to fetch me a cold PBR.

The Captain Replies To His Biggest, And Only,

Being a a godless illegal alien drug crazed tree hugging trans Antifa welfare queen, I naturally worship Hillary (more details on the worship, as well as some surprising details on Comet Ping Pong's central role in the Cult of Hillary to be revealed momentarily). In my smug liberal elitist ignorance, I thought myself to be a supreme authority on Hillary, so you can imagine my shock when I read your post: you seem to be even more versed with all the Hillary trivia, and describe certain events related to her with the detail I previously thought only I possess. I had frequently observed elements of obsessive Hillary fetish among many other conservatives as well, but I thought it to be a temporary infatuation of an ignorant mob with a commanding female figure who, unlike themselves, possesses a formidable pair of cojones and poses an existential threat to the cartoonishly macho perception of their masculinity they struggle to maintain. I am now convinced that what I previously thought was a fleeting anomaly is, in fact, a bona fide popular movement to rival that of the 66 million Americans who voted for her. Mission accomplished! Now, even if there are no Hillary-worshiping liberals left in all of the US (be still, conservative's beating heart!), her everlasting legacy is assured. My bitter resentment of being bested at my own game by a right winger notwithstanding, my pink pussy hat is off to you, Captain!

It is probably the worst kept Deep State secret that every First Lady since Rosalyn Carter was provided with a Secret Service standard issue doppleganger. What is less known is that they are not human, but rather biochemically engineered fem-bots, still being produced, despite Trump's inexplicably ridiculous tariff stunt, in Dr. Evil's secret Chinese labor camp, now partially owned by Apple. The first model, that of Rosalyn, was little more than an experiment, and it exploded when it walked into the Three Mile Island nuclear reactor, causing the now infamous meltdown. The two subsequent models, those of Barbara Bush and Hillary, were much improved variants, but they still exhibited signs of aging, mimicking those of their human originals. Next, Laura's variant was a modest improvement on the previous two, and it remains to be seen how aging affects it. However, Melania's is a completely new model, and it promises to look as inviting fifty years from now as she did when she, in her illegal alien days, posed naked for a bunch of obscure soft core tabloids. So Eric may get his second chance with "Melania" after all, if only he remains patient. The bot is also rumored to speak perfect English, thanks to the newly installed Google Translator.

Back to the Hillary cult and Comet Ping Pong, as promised: Not to brag, but I just happen to be the #3 (after the other two losers on CL) apprentice to Hillary's high priest, Rabbi Mezvinsky, and as such I am privy to some insider information, hence my foolishly arrogant assertion of superior expertise on Hillary. Mezvinsky, BTW, is the Rabbi I recommended to you previously, to circumcise you as the means of escaping the murderous clutches of Albino Bob. His rather lame cover (but who am I to critique my higher ups) is that he is posing as Chelsea's husband. I should know better than share this with a conservative, but since you mortally wounded my pride with your own intimate knowledge of all things Hillary, I will spitefully spill the beans on things you can't possibly know about, and fuck the solemn oath I gave under penalty of eternal damnation to Rabbi Mezvinsky!

Under the still invisible Comet Ping Pong basement that houses the famed child porn operation, which has by now become a rather popular, especially with Alabama Republicans, DC tourist attraction, there is, hiding in plain sight, a secret bunker containing a temple to Hillary. Superbly disguised (if you can't find the basement, how will you ever find what's under it?) and housing a full scale likeness of Hillary made of weapons-grade Uranium, it is the place where Rabbi Mezvinsky ritually spills the blood of ASPCA puppies over the statue, chanting the ancient Hebrew chant "Hare Krishna, Hare Krishna, Krishna Krishna, Hare Hare" on high holidays. The place also doubles as a matzoh bakery, where the Rabbi, in strict accordance with the Protocols of the Elders of Zion, mixes the blood of kidnapped Christian children into the Passover Matzos. Bet none of your 4chan white supremacist scum ever heard this one before, Mr know it all!

This is just a sample of my insider knowledge, but now I must interrupt my bitterly braggadocious stream of consciousness. I am getting filled with remorse, and I am afraid I will be demoted, again, to the #3 position (there is no #4 at the temple) as a consequence of my transgression. Hopefully, I will feel better after I watch the close-ups of Taylor Swift with the sound off and in slow motion.

BTW, pay no attention to Chuck Norris. In his present sorry state and age, he lives in fear of his nurse's aide, let alone Albino Bob.

Almost forgot: I am doing my best to pay a right-handed compliment to you, but no matter how hard I try, it always turns into a nazi salute. I will keep trying, though.

Yours in the secret bunker,