Some of you may be old enough to remember Mike Dukakis. For those of you who don't, he was a liberal Democrat politician from Massachusetts who ran for president in 1988. In an attempt to portray himself as more "hawkish" during his campaign, some brilliant motherfucker came up with the idea to do a photo-shoot of old Mikey riding a tank...just to prove his pro-military stance. It came off as one of the most laughable moments in modern political history. Dukakis looked like Captain Doofus with an oversized tanker's helmet, and wearing a fucking tie under what looked like a green lab-coat...some say this ridiculous charade played a major role in his losing the election.

Elizabeth Warren, a liberal Democratic politician from Massachusetts has tossed her hat in the ring for the 2020 presidential race. She has a few problems however...for one, she's recently taken a huge hit over her debunked claims of Native American heritage that she had used for professional advantage as a Harvard professor. Many have wondered why she released the results of the DNA test that revealed she was only 1/1024th Indian, it seemed as if she was shooting herself in the foot with an arrow; but she had a heap good reason to do this...his name was Howie Carr.

Carr is a very well-known conservative radio talk-show host from Boston, and he hates Warren. A couple of years ago, he tried to call bullshit on Lizzie's Injun blood story, so he swiped a pen from her at a book signing event...Carr then sent the pen off for DNA analysis. He was hoping that just maybe, Warren had stuck the pen in her mouth or maybe left enough sweat/skin cells on it to reveal her genetic makeup. It came back as "insufficient sample", but Carr told his listeners about his sneaky prank, and you can be certain Warren must have shit her $400 Dolce And Gabbana pants when she heard about it. She knew it was only a matter of time before someone was going to get a DNA sample from her...a discarded cup at Starbucks, nail/hair-clippings from the salon, a Kleenex full of snot that she tossed in a trash can...people leave DNA everywhere they go.

Warren knew that if she was going to run in 2020, she had to put the Indian story behind her, so she decided to beat her opponents to the punch and released her own DNA results. She realized that she was gonna take a lot of flack when it only showed 1/1024% Injun, but she figured it was best to get it over with a couple of months before announcing her candidacy...the logic being that today's newspaper headline is tomorrow's fish wrapper. This is how scumbag politicians think; they know the public has a very short attention-span, and if you can weather the storm, eventually your problems fade away in the 24-hour news-cycle. You release your damaging info, a few days later a kid shoots up a school, and your damaging info vanishes into the mist.

So NOW, the fake Injun is trying to down-play her "liberal elite" image, knowing that was part of the reason her friend Hillary lost in 2016. She's now telling folks about her humble upbringing in Oklahoma, and how her family just scraped by...goodbye Pocahontas, hello Mary Ellen Walton. Yup old Liz is a regular gal, she's in-touch with the common folk...I bet she even drives herself to the grocery store in a 2004 Nissan Sentra and does her own shopping! Not sure, but I think I even saw her at the laundromat one day, eating snack-machine cheese doodles while waiting for her clothes to dry.

And here's a real hoot...in a recent livestream, Warren reveals that she drinks beer!

"Hold on a second -- I'm gonna get me a BEER," she said, as she walked out of view of the camera.

"Um, want a BEER?" she then asked as her husband briefly entered the room.

"No, I'll pass on a BEER for now," he responded. Then, matter-of-factly from across the camera as he left the kitchen, he offered a quick farewell: "Enjoy your BEER!"

Warren is then shown lifting the bottle to her mouth and awkwardly wrapping her lips around it like a Catholic school girl giving her first blowjob...if I had to guess, I'd say it was the first time she ever drank from a bottle.

Yeah...totally unstaged and natural. So was the shout-out to her Instagram viewers that reminded me of Miss Sally on Romper Room saying hello to all the Good Do Bees that she saw in her magic mirror.

"Fortnite? Good to see you," Warren said at one point in the livestream, reading the online handle of one user in the chat, whose name refers to a popular online video-game. Someone on Liz's team must have thought this was a clever way of showing that our gal is a "hip granny", sort of a wrinkly, geriatric version of Alexandria Ocasio-Cortez.

That's right, Warren is in touch with the beer-drinking working class AND the young folks! It's probably only a matter of time before she reveals how much she loves the Red Sox, and that she always carries a bottle of hot-sauce in her purse. Maybe her people can get some pics of her harvesting cranberries, cheering at a NASCAR race, or skeet-shooting at a rod and gun club...stuff like that is bound to make regular folks believe she's not an elite lib who lives in a 5 million dollar mansion with 24 hour armed security, and hasn't driven a car or bought a gallon of milk in 40 years.

I think most people with an IQ above room temperature are laughing their asses off at this ridiculous bullshit, but the sad truth is that Warren's "handlers" think this blatant nonsense will somehow convince voters that she's a normal human being. If she somehow manages to get the nomination, it will speak volumes as to the gullibility and utter stupidity of the Democratic base...and it's almost a guarantee that Trump will win in a landslide in 2020. I'm getting a boner just thinking about him humiliating and utterly destroying this sleazy political chameleon...maybe he'll start with a Tweet reminding her that Indians shouldn't drink.

Hold On A Second--

I'm Gonna Get Me A Beer! 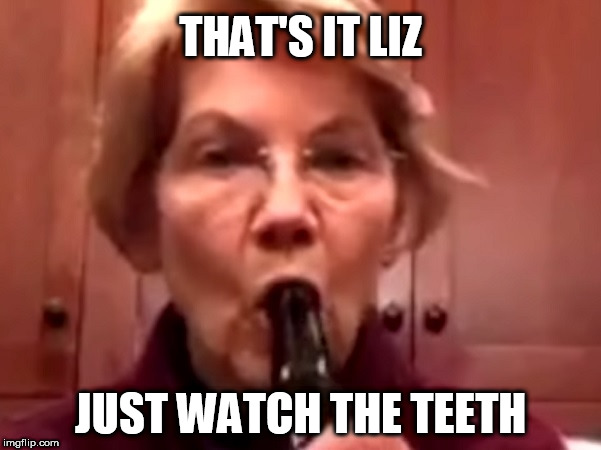