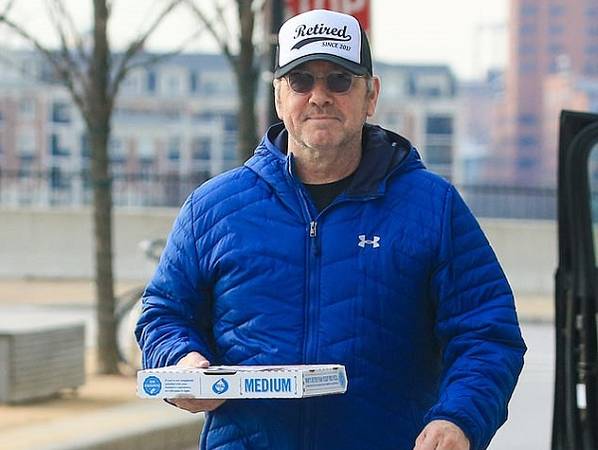 This page proudly sponsored by

Ya gotta love the Daily Mail...it's sort of a daily British version of the National Enquirer that embraces the true nature of sleazy tabloid journalism. Here's an excerpt from an article they published this morning.

Kevin Spacey emerged from his $6 million hiding place on Sunday sporting a baseball cap that read 'Retired since 2017'.

Spacey congratulated Daily Mail on finding him and rewarded our photographer with a free pizza.

The star headed to Domino's to pick up a medium cheese and tomato pie before pulling up beside photojournalist Jae Donnelly and handing it over.

'I know you're just doing your job,' he said with a smirk. 'Keep warm and have a happy New Year.'

Yup...a tasty cheese pizza. Kevin could have brought the lads coffee and donuts, a few Quarter Pounders, maybe a bucket of KFC...but he brought them a cheese pizza. I don't know about you, but the old Captain catches just a whiff of Pizzagate here. Oh, call me crazy (it certainly won't be the first time), but maybe this is Spacey's thinly veiled threat to the Deep State that if they don't get him out of his current legal jam he might just start spilling his guts about stuff like his four trips to Epstein's Lolita Island with Bill Clinton. Yeah...that's not some 4chan or Reddit bullshit, there is documented evidence that these two traveled together on the Lolita Express and partied on an island owned by a billionaire pedophile. Funny how CNN and MSNBC haven't mentioned any of this.

Between this pizza delivery and the recent bizarre video that Spacey published on Christmas Eve, you might think he's just fucking nuts, but maybe he's only playing crazy in order to gain the attention of certain people. "Hey, I'm a loose cannon, and I know where all the bodies are buried!" is basically what he's telling them I think. One might note that in the video, Spacey is drinking from a cup emblazoned with the crest of the British Royal Family...perhaps a not-so-subtle hint to his inside knowledge of Prince Andrew's well-documented "friendship" with Epstein.

You can't be a Hollywood serial-pedophile like Spacey and not know a lot of other people's dirty secrets. Now, the kiddy-diddling animal is in a corner...his career is destroyed, he faces financial ruin from the 15 accusers who are going to sue the living fuck out of him, and he could even end up in prison before all this is over. So maybe he's pulling out his "insurance policy"...either his low friends in high places makes his problems go away or he's going to fuck up the lives of some very prominent figures.

Of course, fucking with the Deep State is always a dangerous game, and it could go terribly wrong for Mr. Spacey; don't be surprised if he meets the same gruesome fate as Kate Spade and Anthony Bourdain before he has the chance to open that can of worms, and when it happens you can say you read it here first.