I occasionally post on the New York City Craigslist political board because I know there are a significant number of politically-incorrect New Yorkers who look forward to reading my facetious dribble, many of whom eventually find their way to this site (which in theory would increase my advertising revenue if I had any advertisers besides the fake ones I create). The reason I'm aware of these folks is because I pick up a lot of NY hits after posting on there, and I believe there are also a fair amount of folks from other places who peruse that board just because they want to see what New Yorkers are saying about politics (or maybe they're just looking for one of those "Work At Home: Earn $1000 Daily" jobs, who knows). I actually had a chap from fucking New Zealand visiting my site on a daily basis until I scared him off by mentioning him on the board, and I think he may have been a little creeped-out when I called him at 3am New Zealand standard-time to say hello (I carelessly forgot about the time difference...my bad). You see, my website hit-tracker not only reveals your IP, but also your name, address, social-security number (or the New Zealand equivalent), telephone number, mother's maiden name, religion, sexual persuasion, marital-status, criminal record, bank account and credit card numbers, shoe-size, net-worth, occupation, and whether or not you're circumcised. It's the same tracking system that Amazon and Google use, incredible technology.

That sleepy fellow in NZ (he sounded pretty drunk actually, and I could hear a sheep baaing in the background) angrily told me to "bugger off" and called me a "bloody wanker" (not sure what that is, but it sounded rather insulting) before abruptly hanging up on me. He never visited the site again, but should he ever return and read this, I'd just like to apologize to him...sorry for waking you up, mate, and you can rest assured that all your confidential information will remain safe and secure in the Caleb's Island Intelligence Agency's website visitors data-base, unless those blasted Russian hackers get into my private server again and sell your identity on the dark web. Oh, and I promise not to tell anyone about the sheep-molestation charge in Canterbury back in '97...our little secret, and besides, you were acquitted when the victim refused to testify. Also, mums the word on all those bad checks you wrote in 2008, and your 90 day stint in rehab back in 2012.

By publishing my caustic, anti-Semitic, misogynistic, homophobic, and racist diatribe on the New York board, I fully realize that a liberal-minded celebrity shit-stain like Madonna or Robert De Niro might inadvertently click on one of my pro-Trump/anti-libtard posts and blow a gasket. I'd love to see that wrinkled whore Madonna telling a crowd of ugly man-hating bitches clad in pink pussy hats that she has thought an awful lot about blowing up the Dictatorial Mansion (while also promising granny-gumjobs to my male political adversaries), or to have De Niro scream "FUCK CALEB!" repeatedly and threaten to punch me out in his best Jake LaMotta impersonation (bring it on, Raging Bullshit, you show me nothing, and your mutt-kids are ugly as fuck!). Jerry Seinfeld, Sarah Jessica Parker, Woody Allen, Joy Behar, Tina Fey, Sting, Kevin Bacon, Justin Timberlake, Lady Gaga...they all reside in NYC from what I understand, and any one of these leftist loonies could stumble upon my politically-incorrect posts. All it would take is pissing one of them off with a bit of my tongue-in-cheek Holocaust humor (they're all Jews I think, besides Sting, who's most likely a Scientologist or something) and prompting an angry Tweet that would boost the fuck out of my ratings (my 15 minutes of fame)...though I suppose it could also provoke some unwanted attention from that blasted Anti-Defamation League (I've had problems with them before). Hey, they say any publicity is good publicity...unless it results in legal action.

Mostly though, by posting on the Big Apple board I hope to someday attract the attention of Hillary Clinton, though Shady Stu constantly warns me that I'm just begging for a mysterious and untimely demise. Not that Hillary herself is likely to be lurking in here, but there can be little doubt that her faithful minions monitor social-media looking for anything that might be considered detrimental to Mrs. Clinton's sterling reputation (2020 is right around the corner). Albino Bob, the rogue homosexual Mossad agent in her employ, may be reading this right now for all I know. He makes a quick call to Chappaqua, Hillary logs onto CL and reads the unflattering post, then clicks on the link to my site...that's when the vases and lamps will start flying. This bitch tried to crucify a fucking cartoon frog during her ill-fated campaign, there's no telling what she might try to do to a guy like me. I keep thinking of the 56 people (including my old drinking buddy, Anthony Bourdain) who have already met tragic fates after crossing Hillary, and I have doubts that even my able-bodied chief of security (a little long in the tooth, but still a world-renowned bad-ass), Chuck Norris, will be able to prevent me from committing hari-kari with two shots in the back of the head, or hanging myself with a fashionable red scarf (perhaps making it look like a case of auto-erotic asphyxiation that went awry by leaving a few dirty magazines laying about). Nonetheless, I shall continue to taunt the evil cunt with my stinging barbs and cruel, mocking memes. Taunting Miss Hillary...believe it or not, it's what I do for fun.

Gotta run, literally, as there's some surly chap who looks like Albino Bob knocking on my office door. 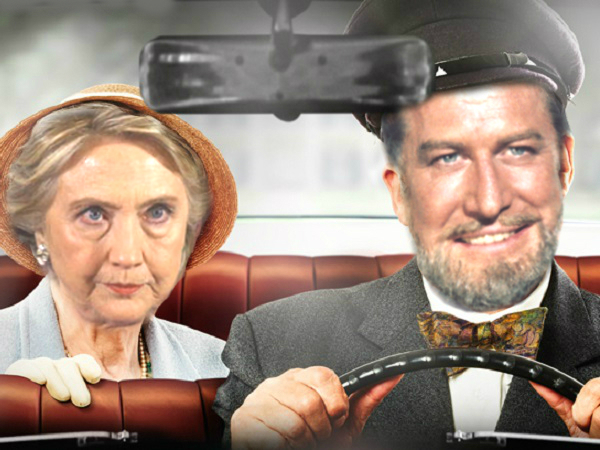