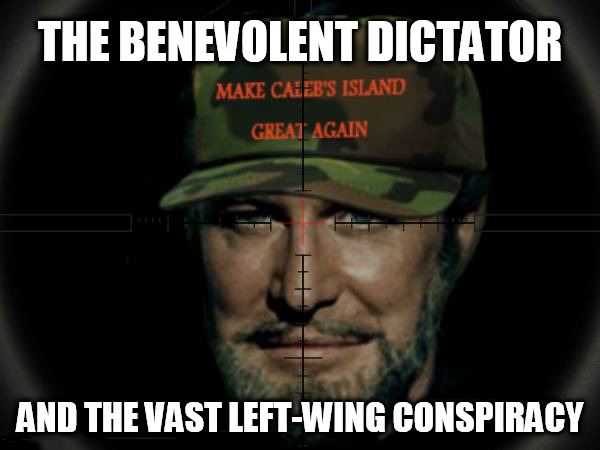 Being a benevolent dictator isn't all it's cracked up to be...for one thing, you always have to worry about being overthrown, whether it be by an assassins bullet, or covert intelligence operations of some sort. Dangerous leftist groups such as CNN, Antifa, the Joy Behar Anti-Caleb Coalition, and certain militant factions of the Geek Squad have long sought to undermine my rule in what I, and many others, consider to be a vast left-wing conspiracy. Over the years these radical organizations have made several attempts to infiltrate my organization with moles; one such incident was in 2012, when singer/songwriter Taylor Swift applied for an entry level mail-room position here at the home office.

At the time, Taylor was rumored to be a closet-4channer, and the Daily Stormer hinted in an article that she was a white-supremast. (Yes, Taylor showed her true colors when she shilled for a Dem in the 2018 midterms, but back in the day we all were hoping that she was one of "us".) I DID think it was rather odd that this Aryan goddess would sacrifice her successful musical career for the lowly, mundane occupation of sorting my fan mail (not to mention potentially dangerous with the mail-bombs and anthrax letters), but her bee-stung lips and cute button nose quickly dispelled my concerns. Thinking with my blasted mizzen mast, I hired her immediately, foolishly forgoing the stringent vetting process normally required for employment. This was a decision that I would later deeply regret.

Despite the rigorous cavity checks that I eagerly conducted on Ms. Swift each morning, she still somehow managed to smuggle a video camera into the home office and secretly recorded the daily activities of myself and the staff, including a salacious moment with Mistress Muir and Sal Monella engaging in an improptu golden shower in the break room. Taylor handed these tapes off to a rogue homosexual Mossad agent named Bob, a hard-drinking albino chap who was romantically involved with Don Lemon at the time. Lemon then gave the tapes to his Jewish bosses at CNN, who in turn sent them to their editing department.

The tapes were then selectivley edited to create a video that falsely portrayed us as maniacal, anti-semitic lunatics who were plotting to invade nearby Martha's Vineyard and detain the island's wealthy, liberal elites in "detention facilities" featuring large brick chimneys that belched dark, foul-smelling smoke 24 hours a day. This of course was a tremendous exaggeration of our actual intentions, as operating the ovens around the clock would obviously have been cost-prohibitive. After several nude waterboarding sessions, Ms. Swift tearfully confessed that the plan was to air the video on CNN, hopefully provoking Martha's Vineyard into launching a pre-emptive strike against Caleb's Island. The sinister plot was foiled, but the Captain's ongoing battle with the vast left-wing conspiracy continues.

This page is proudly sponsored by